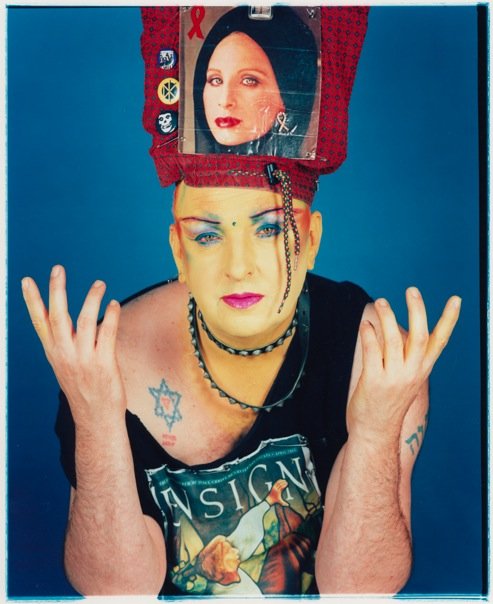 This morning, following a long spell of serious health issues, author, former Mormon missionary, ageless gay punk, and longtime friend Wilum H. Pugmire left this world forever, at least in body. It seems to me that no one who has been more than casually immersed in the world of dark fiction over the past few decades didn't know Wilum. His prose, heavily influenced by Lovecraft, Clark Ashton Smith, Robert Bloch, and others, has appeared in countless publications and in several collections of his work (with more to come). He contributed several stories to Deathrealm in its day, which became some of my favorite tales I ever published. He is, without question, one of the most memorable characters I've known in this life, even though we sadly never met face to face.

To casual observers, Wilum might have sometimes appeared ominous, even frightening, as he enjoyed donning all manner of costumes in all seasons. Yet Wilum was anything but frightening. He was a sensitive, gentle, thoughtful, and kind individual, who championed causes for marginalized people. Being gay, more than occasionally flamboyant (often at the darker end of the spectrum), and anything but wealthy, he knew first-hand about having to struggle in this world. He could be moody, but at least in my experience, never hostile. In all the years he and I frequented the same or similar circles in the world of dark literature, I would be hard-pressed to think of a single derogatory remark ever aimed at him. As does anyone, I'm sure he had his detractors, but by all indications, his must have been few in number. And my guess is that such people simply did not understand him, or care to try.

I first encountered the name "Bill Pugmire" around 1970, in the pages of Famous Monsters of Filmland, to which he frequently contributed letters of comment, and in Greg Shoemaker's venerable Japanese Fantasy Film Journal, to which he also contributed letters and columns. In my young mind at the time, I considered him famous. Somewhere along the line, I'm not sure when, we struck up a long-running correspondence, occasionally chatting on the phone (which he claimed to not be fond of, though he could sure carry on a good conversation). In the 1980s, I saw his work turning up in various small press magazines. When I came up with the idea of publishing Deathrealm, sometime in 1986, he was the first writer I approached about contributing to the magazine. Just over a year ago, I showcased some of his contributions to the magazine in this blog, which you may read about here: "Cool Mist & A Piece of Stone" (December 17, 2017)

You can take a look at a fair selection of his work at Amazon.com here: Wilum H. Pugmire Author Page

Wilum has been a fixture in my life since childhood. Both he and his worked have captured countless hearts, mine included. Given his ongoing health issues, today's news came as sad but not unexpected. While today there is much grief at his passing, I trust that in days and years to come, he will be remembered fondly for not only his literary work but for the unique soul he was... a soul that deeply touched more people than I could ever hope to count.

Rest in peace, Wilum, and know that to many of us, you will be remembered always.

Thank you for your loving rememberance of Wilum. You really captured him as I knew him. He did not suffer fools gladly, and he could pitch a quiet fit with the best of us, but he was always kind and forebearing, and above all, a gentleman (occasionally a great lady, thinking about it). But it was his work which will be remembered in years to come. The personality will fade, but the glory of the written word will abide.
- a.r.nyfors